in communities, victims of the pandemic

The Project:   Building infrastructure of railway lines
COVID:
Perhaps the worst is,
the LOST hope of people

The economic and health crisis as a result of the Covid Pandemic, has generated uncertainty about the future. This forces us to search for alternatives as can alleviate the hunger and unemployment in a way as must be executed in short terms, in addition to benefiting directly to the population.
To overcome this we have to look for something different from Social Assistance, as too can be implemented in a short time - as said to directly benefit the common population. 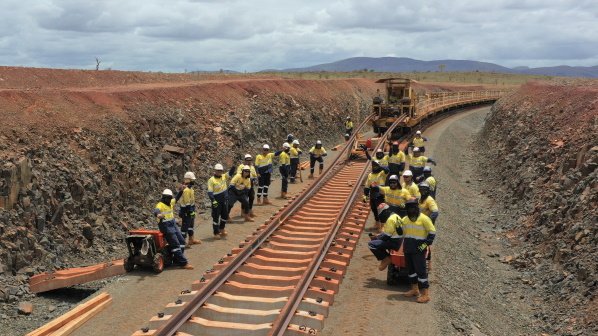 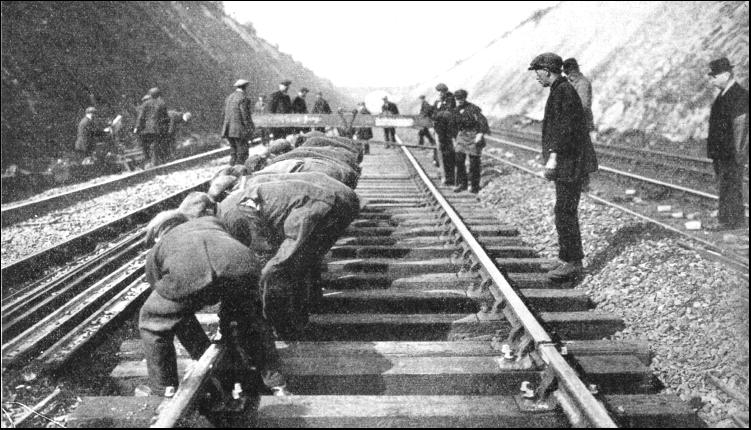 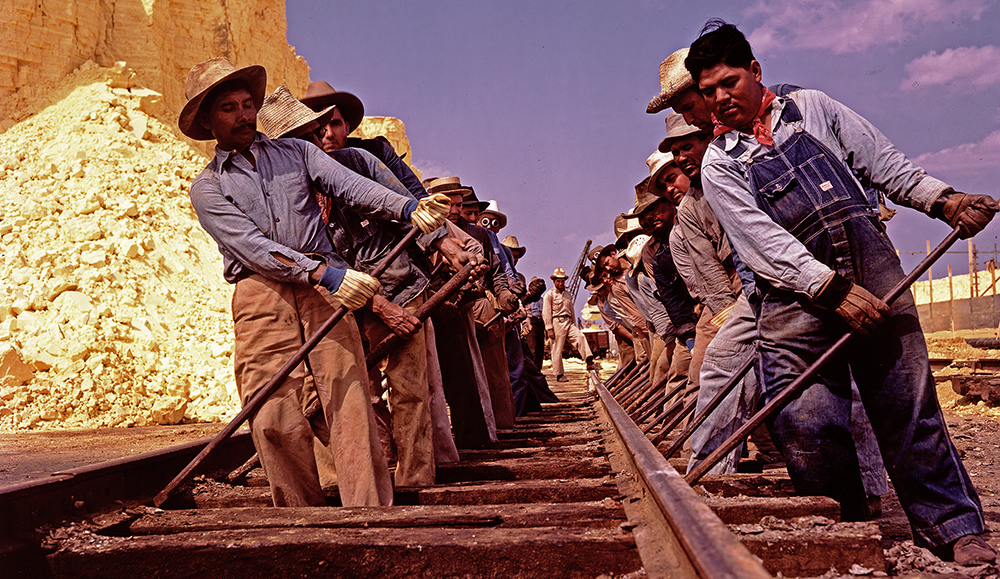 Regardless technology, there is nothing as hinder a result by emphasize on work done by men
- today as formerly

Our task is:   To bring back "the HOPE" to the people

Investing in Infrastructure is one of the options. Any infrastructure - big or small!
Among them, the construction of railway lines is one as attract more attention, by providing benefit - compared to 'social assistance'.
The rails will remain useful for many generations.

Tactically it is rather genial to activate a "class-3 investment" (profit) to obtain a "class-1 purpose" (need) - and thus transfer feasibility into an emergency situation.
Such manoeuvre is not always possible.

The four steps with a domino effect:

1): Generate employment - Hiring local labor.
A railroad construction project will provide an option for the employment of skilled and unskilled labor forces, and these jobs could be filled by the population of the region, where the railroad is built - creating work as source for employment for the resident population in areas where poverty normally is dominant
2): An effect on local activity: A railway - when it is finished - is going to serve the countryside and make it easier for civil society to transport anything like people and cargo - and for its connections with neighboring regions, it will provide options for the development of local professional activities, for example agricultural and industrial activities.
3): A railway needs crew members: The existence of a railway system requires teams for its operations and maintenance of the railroad and its traffic systems - but too teams to maintenance of its rolling stock such as locomotives and wagons.
4): The mines can open up and work: The existence of a railroad in the mountain ranges will allow the mines to open, produce and expand their production with the advantage of a transport system, as can handle a Massive Flow of minerals from the quarries to their collection site on the coast - ready for export.
More mineral extraction will generate more employment for mining workers - and too perhaps, for a process industry. But before we can start the physical construction of the railroad, we need to complete some preparations, and how to fulfill it quickly is a part of the PUSAC proposal.

The explanation is simple:   Choose 'the Experience' abroad - Get it and buy it!

The proposal of PUSAC


Although the government has been giving away bonds to compensate for the lack of employment as effect of the pandemic, this proposal will facilitate useful social projects that can deliver help as are not a lost benefit, but rather represent a payment for services rendered, which will boost the economy of communities and small towns affected by the pandemic.
The objective of this proposal aim to fulfil the physical construction of a railway line for mining transportation in the shortest possible time.

The PUSAC proposal is based on known and proven technology. Directly transferred to Peru and then adapted to the Peruvian reality.
The Achilles heel is the traditional Latin bureaucracy that can easily consume a large amount of time and money.

A new Autonomous Authority for railways:
For this reason, our proposal presupposes the creation of an Autonomous and Independent Authority, which can take care of building the railways - cooperating with ministries and authorities but also with regional and municipal governments

The basic steps of the work plan are:

This recipe is our contribution to rebuild Peru!
1. IDENTIFY the best working mining railway somewhere in the world.
2. CHOOSE the best construction concept that can be adapted to Peru
3. NEGOTIATE access to the Know How.
4. TRANSFER the entire and complete railway system adapting it to Peruvian reality.

The role of PUSAC
1. We have developed the formula and guide for this railway project, and we deliver it without obligation, free of charge - to disposition of the State authorities.
It will also be published on our website: www.pusac.org - for the benefit of post-covid Peru.
2. This proposal is expected to be carried out as a public project by the state - with an autonomous entity that can facilitate the execution and administration.

cut for A4 paper   ✂
page 2 of www.pusac.org/reconstruct-22-UK.htm
- massive employment by railways -

Special conditions in the Andes

Klaus Lynge
EUR ING
A railway from the coast to a mine pit in the central mountains holds some special conditions, as is known at few places in the world - therefore we can find only a little experience, but have a hard challenge for the engineers.
The climatic temperature
First of all the height, where we have to pass up near 5000 metres altitude (at least 4800) to reach the mines. That simply is the condition given by the geography.
The airmen tell us that they calculate with 6.5 degree temperature drop for each kilometer they are going high.
In the Andes 5000 metres is about the snow line and sometimes we have snow - but we don't have hard frost.
The air pressure
The most characteristic is probably the low atmospheric pressure as at 5000 metres is about 50% of pressure at sea level. (Lake Titicaca at 4000 metres is about 60%) The low pressure will not affect an electric locomotive - but some combustion engines will lose force. Passengers can be affected, due to the low oxigen pressure, but a human body may adapt in few days.
The declination
The most mines are situated between three and four thousand metres, so we have to go up over 5000 metres and down to the mine.
The mountain shape is the challenge, because a train is propulsed by the friction between wheels and rails. Therefore we normally is calculating with a certain max declination for a railway. In Peru ve normaly accept 2.5% as max - at least if we are climbing. That low declination give the next challenge. We need to find a way along the slopes.

An example: The first pass on the way from Marcona to Andahuaylas is 4400 meters high and placed about 160km from the coast. In direct line that give us a declination of 2.7%.
Well - so it is -

We have to find a route through the mountains as respect the declinations - or - we have to dig out tunnels or build bridges. We of course prefer a direct rute between mine and port. That we can't find, and therefore we have to choose an alternative way as often will give us the choice between the cheapest route winding upwards or an other perforating expensive tunnels and jumping bridges as permit us go more direct and with higher speed. Of course seen as economy far out in the future.
The mine trains offer a special condition. Due to the flow of mineral as goes from the mine to the port - and not opposite - we could say, that the flow is one-way - not the train - and we could therefore design the railway with steep declination for flow downwards (south western slope of the ridge) and minor declination for flow upwards (the north eastern slope). For example 6% versus 3%. That probably will work for mineral trains, but what about full loaded general cargo trains. Will they skate their wheels when climbing 6% - or what? Probably that too will work, but we would like to have it confirmed.
Just south of our border Chile has a railway with 6% declination over 50km - unfortunately the railway in this years is out of service, and there is no experience to pick up.
The other known case is Flam Railway (Flåmsbana) in Norway as at 80% of its 20km hold 6% - and that railway is in daily use.
This decision is important, because the choice of a route will bind the plant many years.

Option for Generation own Energy

That will depend of technology at disposition

A mine transport system, as may generate its own power ?
Hydropower plants we have in large number in the Andes. Passing 1 million tons of water through a turbine can generate certain electrical power - but lowering equivalent 1 million of minerals theoretically and scientifically can generate the same power. That is what we know.
There will be loss in the transformations, and that is all we know, but how much is where we have a very little experience, neverthemind, under all circumstances we have the option to generate and regenerate the energy.

We still have the problem to resolve: How can we accumulate the energy generated by the train ?

A Fata Morgana - or not ?
The personal ambition is to start a loaded train from 'Las Bambas', drive it up over the eastern slope, pass the ridge and down to Marcona. My hope is to generate so much energy, that the train has enough to return empty from Marcona, run up the western slope and down to Las Bambas.
Post Note:   'Las Bambas' mine is placed 4000 metres over sea level and 360km in right line from the Port of Marcona.
The road to 'Las Bambas' is 7-900km and take between 17-19 hours by car
Pusac web - updated December 2022<